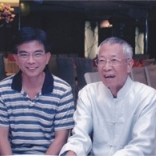 Martial art is something I have been fond of since I was young. It is my honour to be a student of Master Chu Shong Tin, training with him in Wing Chun for many years – years that I have been greatly enriched and benefited from. I am currently an instructor of the Chu Shong Tin Wing Chun Alumni. Being an instructor, I have been deeply experiencing the truth of mutual development from the dynamics of teacher-student relationship. This is also an opportunity for me to pass on Sifu’s style of Wing Chun, contributing to its unceasing continuation.

The following is my reflection on the Wing Chun martial art:

I have been fully aware of the importance of Siu Nim Tau ever since the first day I learned Wing Chun from Sifu. Nevertheless, its essence is still beyond my reach even after practising it for so many years. There has been a turn in terms of feeling after Sifu led us to sense the changes in the body by merely standing: From the outset the legs were just numb, the knees painful, the waist all uncomfortable. As the body changed by the effect of using Nim Tau, I felt more comfortable in the legs (the changes were not visible on the outside). Such feeling is common in and shared by our fellow brothers and sisters.

Once when I was practising Tarn Sau with a senior (brother), I could not manage to achieve it in the relaxed way without using muscular force. At this point Sifu adhered his palm onto my shoulder. I felt that I could move in a way more comfortable than usual; the muscles appeared to be a bit more relaxed – that was all sensed after Sifu’s mere casual touch. The senior who was pressing on my Tarn Sau was immediately destabilised and shifted away. Yet I just felt I had not deployed any force. This is hard to understand.

Then, Sifu told me to grasp tightly the hand of another senior (sister), Ada, stopping her from laying out her hand. Sifu did the same to her, adhering his palm onto her shoulder. I could feel that her muscles turned from stiff to relaxed, and I could not stop her hand any more. Furthermore, there seemed to have a flow of Qi unleashed from the inside of the relaxing body, like a wave gushing out. I was destabilised and expelled right away. Afterwards, Sifu did not touch Ada but just looked into her eyes (eye contact only). She could still achieve the same. It is spectacular, as if I am telling a martial art novel – but the feeling is genuine.