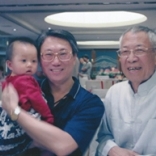 I started learning the Yeung-style Tai Chi in 1979. This led me to come across Sisuk Law Pink, who was the father-in-law of one of my working colleagues. I learned from him that Wing Chun was highly practical. With his enthusiastic recommendation, it was my honour to be finally admitted to the school of Master Chu Shong Tin, my respected Sifu, in 1983 to practise Wing Chun until now. When giving training, Sifu does it all by himself, never relying on others.

The authentic Wing Chun martial art, as I perceive, does not defend but attack the opponent right away. As broadly known, Wing Chun was created by our ancestor Great-grandmaster Ng Mui, a respectable lady who was then in her later years, having passed beyond 80. Her physical strength was nothing compared to men who were powerful and strong. As was her speed of reacting. For this reason, the Wing Chun martial art she created needed to be extremely soft and tender, highly practical as well as efficiently direct. In punching, it must be done in the softest and the most tender way along a perfect straight line (the shortest distance between two points is a straight line) to reach the target.

Most popular martial arts put their focus on forms and moves in their basic form-sets, on how every form and move can be best used, in terms of offence, defence and physical appeal.

In our training, Sifu always reminds us that in Wing Chun the movements are not performed with force, but completely initiated by the mind (as in Siu Nim Tau), so that they could become extremely soft and tender. Similarly, punching would be highly practical, hitting the opponent in the most direct way.

Following Chu’s style of practice allows me to comprehend the essence of genuine Wing Chun: being extremely soft and tender. Nevertheless, one must be very focused during training, with the entire body relaxed. However, the spine has to remain erect – forming a straight line from the tailbone of the spine to the top of the head. This should be achieved by using the mind and in a relaxed way; not by aiming at physical movements of the body to make the spine erect. It must be done in this way in order that every element of the body, including joints, muscles and the nerve system, can be made relaxed.

Being focused and having the entire body relaxed is of course not an easy task. It is in fact the most difficult barrier to overcome in training. As such, one must be patient and follow closely Sifu’s instructions to practise. Otherwise, it will be quite hard to achieve the level at which the mind and the body are unified into one.

Even just achieving a small extent of relaxation would already benefit one’s health. Pains from the old days, such as sciatica, would disappear accordingly. The spirit could relax easily; working would become focused; life would be happier than before.