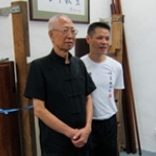 The Wing Chun way is broad and deep,

Once techniques reach the true and utmost pinnacle,

Power roars like river and sea, day and night.

The poem above was authored by Sifu in mid-nineties, as a piece of his genuine calligraphy for keeping, upon the request by a senior fellow brother who was going to emigrate and establish his own martial art school overseas. Sifu pondered for just a while and brushed the four sentences right away. I was impressed by his quick mind and wit – creativity in an instant. With hindsight I got to understand that the poem actually sprang out from Sifu’s appreciation of Wing Chun accumulated throughout the decades of years. It has in fact embedded his long journey during the decades, and should not be something casually regarded as ad hoc. The longer I have practised Wing Chun, the deeper I can comprehend the essence of every sentence of the poem. Hereunder I would like to share with you my guess on such essence.

“The Wing Chun way is broad and deep”. Why is it “broad” as well as “deep”? It is commonly known that the contents of Wing Chun are much simpler than those of other kinds of martial arts. As such, what does “broad” refer to? “Broad” refers to sophistication.

Sifu requires us to train up good control and articulation of all joints, ligaments and bones of the body. Sometimes they are to be set to rotate separately in different, even opposite, directions. In this way there are many parts of the body that need to be managed. Moreover, all this has to be further accorded with the mind and the consciousness. It is that sophisticated! This is an aspect of “broad”.

The other aspect of “broad” relates to its scope of usage. Wing Chun is not confined to just combat. It is equally applicable in our everyday life. For instance it is extremely beneficial to enhancing our bodily quality. Other benefits are numerous and it is not possible to exhaust the list here.

What is meant by “deep” then? It may be denoting “stages”. As far as techniques are concerned, the progress of acquiring them must be in stages. All of us would have had the following experience: At different times Sifu speaks the same words to guide our training. The time span might be half a year, or one whole year, or even longer. Yet every time such guidance does bring about progress or deeper understanding. The same words still take their effects at different times – an indication of the operation of stages. Another example: There was a time when I had had some understanding on the stance. At that point Sifu told me that there was no need to make the stance stable. When I had figured out why it was good without demanding the stance to be stable, he told me further that Wing Chun did not need a stance at all. From building up to applying, to integrating, to being shapeless and formless, each level signifies a better manifestation than the previous one – the progression along levels is clear and lucid. Sifu once said that ever since he learned Wing Chun, even after passing through numerous stages of progress, he had not created anything new. What he has done is just to uncover the undiscovered content of Wing Chun. The depth of Wing Chun is indeed unimaginable.

“Once techniques reach the true and utmost pinnacle“. How to locate the “pinnacle”? I do not opine that Sifu has already reached the pinnacle. I believe that Sifu will agree with me. Below is an incident that can substantiate my opinion.

About 10 years ago, in an occasion sharing Wing Chun with the practitioners in Foshan, Sifu demonstrated how to fight back when being constrained in various unfavourable situations. His demonstrations urged the audience to reassess the latent power resided in Wing Chun. There was a question from the audience: “Is this the pinnacle reached?” Sifu replied that the current position could be no doubt escalated to the next level after further serious training. I guess at that moment Sifu thought that there would still be room for improvement for any level already achieved.

Facts are the best proof. Sifu’s level today has transcended many, many times since then. I suppose that in his mind there is no such thing as “pinnacle”. Instead, it is appropriate to describe it by quoting a proverb: There is no best, but just better.

“Power roars like river and sea, day and night”. In this last sentence of the poem I would like to talk about the word “power”. This is my real experience in person: In my practice of Sticking Hands with Sifu, once in contact with his hands, I felt that whenever I wanted to exert force to fight back, Sifu appeared to me as a great wall in the front. I just could not move it no matter how hard I had tried. On the other hand, when I tried to recede instead, it seemed that I had fallen into a massive net, being hindered in all directions. In this way, I could neither fight back, nor step back – could only remain vulnerable to be captured. This is really the situation described as being overwhelmed by power. In appearance, Sifu had just deployed the usual moves. Yet the result was the unceasing and invincible power. A deep experience in it would certainly be deemed unforgettable lifelong.

The above is my thinking inspired by Sifu’s poem. Do you have other thoughts, all my fellow brothers and sisters?