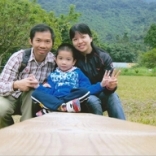 I first became a student of Master Chu Shong Tin in early September of 2004. Sifu has great passion for the Wing Chun martial art, and is devoted in teaching us. Although I just keep for myself a casual attitude in learning, I feel very relaxed and natural, due to the relaxed atmosphere during training as well as Sifu’s encouragement and guidance. What a remarkable feeling!

My body’s condition had shown obvious improvements after training for half a year in Wing Chun. For instance, the area around the cervical vertebrae used to be very painful. It persisted even after considerable massage treatments. Unexpectedly, after the half-a-year training, it had fully recovered. Also, I usually sweated quite a lot during sleep. The sweating problem had gradually been alleviated until it totally disappeared. Furthermore, when I taught playing piano in kindergarten, in the past I had to use a lot of effort in pressing the keys. Now my fingers have become stronger and I can play the piano more easily! In short, after practising Wing Chun, the whole of me has become spirited and fresh!

As training goes day by day, I have got used to being at Sifu’s place every day to practise together with my senior fellow brothers and sisters. With Sifu’s attentive guidance, my experience and understanding has been accumulating bit by bit, day by day. When I practised the stance in the relaxed way – spine rising upright, muscles relaxed, mood kept calm – my body was actually working inside on its own. Gradually I felt my standing was natural and smooth! Sifu helped me relax further. I could then easily handle on-coming forces greater than my own weight. What a wonder! Wing Chun is really spectacular!

In April 2007, I became pregnant. At the beginning, my body was undergoing some changes, making me somehow uncomfortable. But I still kept practising Wing Chun. My body, in fact, was getting more settled gradually. There were little gestation reactions. Every day I kept on working, practising Wing Chun, and enjoying delicious foods. Even until the night before I gave birth to my baby, I was still training at Sifu’s place. Early the following morning I was admitted to hospital – my little Wing Chun baby was then born! After the postpartum period of one month, I returned to Sifu’s place for training again. My body recovered satisfactorily, and there were no pains in the lumbar vertebrae, a typical symptom occurring after childbirth.

Time flies – I have already been training in Wing Chun for more than eight years. It is my honour to be able to follow Master Chu! He can always point out to me what to improve. When I manage to cross to another stage, he can further inspire me in comprehending, directing me onto the correct path. Even as a casual exercise, Wing Chun brings up my spirit every day – a feeling of fulfilment, bringing about the appreciation of beauty in the heart, the beauty of one’s uplifting arising from gaining more internal essence!