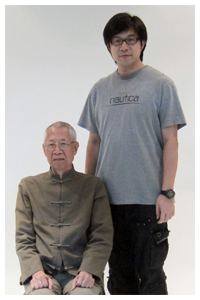 Master Chu Shong Tin is my teacher as well as my father. With this background I got to know about Wing Chun since I was a kid. Nevertheless, training at those times was more or less just imitation of movements displayed by my father and the senior fellows. I had no idea what the movements were actually for. It was not until I went to secondary school that I started to treat Wing Chun more seriously.

Once, a senior fellow brother asked me about the reason for practising Wing Chun, whether it was my own preference, or I was just influenced by my father. In fact, I was not particularly interested in Wing Chun at the beginning. My father, on the other hand, did not oblige me to train in it. Perhaps since my home was the training hall, it was natural for me to have some training every day after getting home. As time went by, it became a habit. Moreover, when my father gave training, he did not impose any rules or rituals. All of us practised in a very relaxed atmosphere. And I, who was still young, did not feel bored at all.

My father has been emphasising several points for practising Wing Chun since I was young: making the spine rise, relaxing the whole body and fully giving up using muscles. These points are also true for practising Sticking Hands. Initially, I did not bother to comprehend what all this meant, and just kept on practising form-sets and Sticking Hands without using force. Perhaps those requirements on relaxation and making the spine rise had not come to my awareness. The result was that I often used muscles in doing Sticking Hands and my father ordered me to stop and return to practising Siu Nim Tau from scratch.

Even so, I still could not get a hint on what relaxation and making the spine rise meant. It was not until a group of students of one of our senior fellows dedicatedly moved to Hong Kong for practising Wing Chun that my conception on training started to change. Before they came, my father had already indicated to them that only the Sheep-clamping Stance would be taught in the first year, nothing else. That was what happened in the first year. To this training method carried out by my father, I did not raise any query. Instead, I believed there must be some reasons for doing that, and thus decided to train with them all together – practising only the Sheep-clamping Stance, nothing else, not even Siu Nim Tau. I followed the instructions ever given by my father, and kept myself purposelessly and naturally standing there. Three years passed in such standing mode, after which I finally got to know to what the “relaxation” emphasised by my father actually referred.

Before I managed to step into the real world of “relaxation”, I had made many guesses on that word. After all, what could be said to “relaxation”? Was it the relaxation resulting from body movements for stretching ligaments, extending the body parts or exercises alike? Was it the relaxation state when one lays in bed? Or perhaps was it just the something when one swung without effort? In spite of all the guessing, I still could not figure out a solid answer. After the three-year practice on the Sheep-clamping Stance, I was then able to reckon that the real “relaxation” was a matter of a higher level, completely different from all my previous hypotheses.

Moving muscles requires one to set the body in motion. It is like a doll made of clothes and filled up fully with cotton inside. You have to bend its limbs and body in order to set the cotton within those areas in motion. Yet the three-year standing awakened in me that even if there are no movements, I can still make some muscles of mine move. It is as if there is no need to touch the doll, but the cotton inside can move on its own. This is, however, completely unnoticeable in appearance. Only at that moment the true meaning of “relaxation” was revealed to me, the moment that I could be regarded as starting the real journey of Wing Chun.

When “spine rising” is concerned, it can be imagined as having some intangible thing rising up from the tail of the spine up to the top, but a bit backward, of the head. At the beginning, this kind of practice by imagination was incomprehensible to me. At a later stage, however, when the practice of both “spine rising” and “relaxation” brought about results, when the two were accorded with each other, I could feel my body seemingly lightened in weight. At times the entire body was even as if completely gone, leaving only the subconscious. Since there was no physical body, there was no centre of weight neither. No wonder my father always says ultimately no stance is needed in Wing Chun. Another purpose of “spine rising” is to turn on Nim Tau, which, once started, enables the use of Nim Lik. It is a kind of power generated by the mind (TN: Yee Nim in Cantonese) and as such it was named Nim Lik by my father. When Nim Lik has been developed, the performing of the entire form-set Siu Nim Tau can then be initiated by the mind. For this reason this first form-set of Wing Chun is known as Siu Nim Tau. It is the most foundational to, as

well as the key to the Wing Chun martial art. If it is not practised well, one will only manage to acquire the shapes of the forms in Chum Kiu, Biu Gee, Wooden Dummy, the Pole and the Knives, but nothing else.

Besides the form-sets, Sticking Hands should also be practised without using force. In the first place, one should always stay away from the attitude of wanting to win. This is something my father often reminds us. As long as one intends, even though just lightly, to win, one will then tense his muscles that makes relaxation impossible. Moreover, when doing Sticking Hands, the states of “relaxation” and “spine rising” should always be maintained, while following the principle of not using force in both offence and defence. It does not matter whether an offence or defence is successful. It is more important that when dissipating the opponent’s oncoming attacks, it is all done only under the condition that one’s muscles are all the time free from any tensing up. Training of this kind is indeed very difficult. It is a natural reflex to tense muscles once in contact with an opponent. The only way out is to persist in staying away from the attitude of wanting to win.

Wing Chun is not just a martial art. Its nature of heavy internal exploration is also beneficial to health. My father is a remarkable example. In early 2009, he was diagnosed to have tumors in both the liver and one of the kidneys. The doctor concluded that he could only live for six to nine months more. He had undertaken chemotherapy treatment twice. Little improvement was seen, though. At the same time, there was another problem in his body: the level of blood platelets was extremely low. The normal level should range from 150 to 400; my father’s was just 15. The low level had not risen even after transfusion of platelets several times. It is now 2013. My father is still alive, and spirited. What the doctor predicted has not occurred. Although my father has been treated with chemotherapy twice, no typical side effects are found in his body. The extremely low level of blood platelets should have left him a lot of bruises on the entire body without cause. Surprisingly there is no such symptom at all. There are even no bruises resulted from impactful contacts during training. Such unusual case is hard to explain, not even by the doctors. Although there is no evidence for proving that it is linked to Wing Chun, I believe my father’s attainment in internal exploration has more or less contributed to the situation.

The Wing Chun martial art is indeed highly profound. You must alter your usual thoughts and habits, at moments you even have to go opposite to the normal and reverse logic. From the bottom of your heart there is no pride nor willingness to win, not even just a little. It requires substantially long time for making such changes to habits as well as attitude. Take me as an example. I have already trained in Wing Chun for 20 years. However, I have not even got a satisfactory hold of the Sheep-clamping Stance.

The Nim Lik as propounded by my father has not been reasonably explained in the academia. I have learned a lesson: To accept something I might regard as impossible; even though it looks ridiculous, I should not exclude that it could be possible. Its apparent impossibility might be just due to the inadequacy of knowledge nowadays, which would improve and be able to give an explanation in the future.