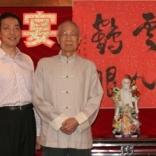 I was weak when I was young. This was the reason I took up martial arts, several kinds of which I have practised. I started Wing Chun in the end of the sixties, and embarked on teaching it at the end of the seventies. However, the more I understood Wing Chun, the more I found myself inadequate and full of puzzles. In applying forms, I always felt incapable of deploying the different moves naturally. I could hardly tell why Wing Chun was claimed to be based on internal power. It was equally incomprehensible why this martial art was created by a lady (Greatgrandmaster Ng Mui). I often asked myself whether the inadequacy arose from my inability in learning, or there was actually something not yet revealed. As such, I plainly told my students and the young that there should be something more in Wing Chun not accessible by me yet. It could not be the scenario that our ancestors were not clever enough to discover the inadequacies, which were then found by us nowadays.

It had been a long pursuit, through seniors and friends, before I was, with a bit of luck, admitted to Master Chu’s door, where my puzzles on Wing Chun were answered: I came to understand the content of the kind of Wing Chun based on internal power; the reasons for even the elderly and the bodily weaker ladies still being able to manifest Wing Chun’s power; the main difference between Wing Chun and other kinds of martial arts which mainly rely on strength acquired.

The key point is in “internal essence”. The inborn biological structure of the human body is the base, upon which latent abilities are hammered, deployed and manifested. A kind of colossal power can then be generated – something not attainable from the acquired muscular force. Such kind of power is not even governed by physical forms. It is always massive regardless of shapes and angles, in great contrast to those kinds of martial arts built upon external moves, force mechanics and applied angles. That is, it cannot be satisfactorily explained with knowledge in physics and mechanical structures. No wonder it is a highly secretive skill, only accessible by senses but not the cognitive.

It is analogous to the skills of a master of Chinese painting: a casual move of the brush already fully paints a green pine, or a slim bamboo, or a mountain, or a river. Closely akin to what the Buddha says: Let down. Once letting down, the spirit becomes unbound, the muscles relaxed. By then what Grandmaster Ip Man had said could be achieved: The entire body relaxes, no force is being deployed even in punching.

The most important step is to grasp on how to give up the habit of generating force with muscles. After all, thinking of this sort should definitely be avoided: It does no harm to slightly use some force; or defence is not possible without using force. But the most unbearable thing is that when you head towards such direction for training, you will find that the power you used to have is diminishing, yet the new kind of power has not come to effect. What remains in you is an unbearable sense of loss.

Do you have the belief to persist, to be a Wing Chun guy temporarily knowing nothing about Wing Chun? This is a hard fact to reckon with. Nor will you know when you will succeed. The gateway hardest to pass through is nothing but yourself!

Success does not come from luck. How to succeed? Hard-working will naturally bring you there.